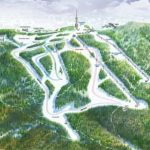 Medvednica called the Zagreb worse. Apex is the name of its highest part.

The foot Medvednica can come from different parts of several mountain trail leads to the top and from the village of Zagorje, to lead them from Zagreb suburban buses (Jablanovec, Gornja Bistra, King Top) and train (Stubičke Spa, Lower and Upper Stubica).

Downhill cover and artificial snow. Sun on the winter Medvednici has significantly more than in Zagreb and Zagorje, and then visit the most visitors.

Ridge from 2005. g. proud home to FIS World Cup skiers, and since 2007. race for men. For the purposes of the World Cup, was completely renovated Red Run, which earthworks, newly setup of high and low pressure guns, and new floodlights illuminated an entirely new look, which is not far from the quality of some foreign ski trails.